I made it! It was a mission to get to the awards on time with work people asking me last minute questions as I’m trying to dash out, but we got there, we got our pre-award show drinks, we got to our nose bleeder seats, and we got our little goody bag.

As we entered the Savoy Theatre, there were photographers shouting out for Gemma Arterton (aka one of the Bond Girl), the co-hostess of the show. Admittedly, the only thing I’ve seen her in was the Bond movie, and her acting wasn’t all that. Similarly, as a hostess/presenter for fashion awards, she wasn’t all that either. Weird to see a big actress have the nerves, and over “present”, but I know I could never get in front of a fashion crowd and be confident, so kudos to the Bond girl. Anyhoo, on to the fun stuff.

The stage was really impressive with a beautiful installation and video projections, that changed the installation’s colours, displayed clips and showcased designers work. I’m a big fan for 3D video projections, having seen it used in musicals and concerts, it was nice to see the technology used at an awards show. 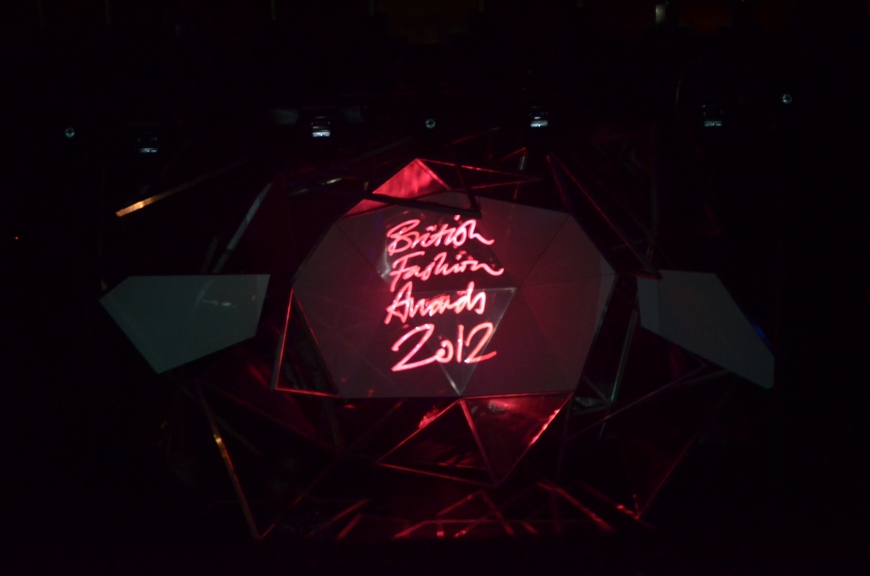 One of my favourite awards, is the British Fashion Icon award. I must say I was a little disappointed that Alexa Chung was the winner (again…), as although I love her style, I would love to see someone new with and edgier more London style, who really brings British designers to the world. Alas, perhaps next year. (Note that the blurry man presenting the award is non other than the fabulously tanned Valentino – who’s in London for the opening of his Somerset House exhibition… watch this blog as I will be going soooon!).

A strange award, is the Red Carpet award that went to Roksanda Ilincic, awarded to the designer who is favoured to the stars. I was so surprised that Alexander McQueen was not  even nominated (*gasp*… I do not lie!). Mind you, I do love Roksanda’s dresses, the beading in the gown she wore was just exquisite  and her fabrics and colours are always divine. Perhaps because I am yet to own one of her beautiful gowns, I’m not as devoted to her, but I do love her gowns!

I was so happy to see Erdem win the New Establishment award, recognising that he is leading a particular movement in British fashion that is taking the industry by storm. Oh how I love his fabrics, colours and shapes.

The winner for model of the year (of course) went to Cara Delevigne, who has taken over the magazines and top fashion house campaigns in the last year. Seeing her actually speak make me like her a little more as she came across as a fun joker and quite easy going (in her pictures she always looks quite harsh with her chizzled cheeks and her dark dark eyebrows). I did see her goof around after the Sass & Bide Fashion show, where it was quite funny to see her pull some not so pretty faces!

The big winner of the evening after picking up two awards, the coveted British Designer of the year and also Designer Brand. Personally, I still love Erdem and Mary Katrantzou (who sadly missed out on any awards) more, but I guess they are fairly new and have time to still build their fashion house and win. Stella’s speech was quite touching, as she mentioned that leaving Chloe was the hardest decision she had to make, and that people told her to face that she would fall flat on her face. Her message, push on for that dream and believe in yourself! Yes I can… yes I can… 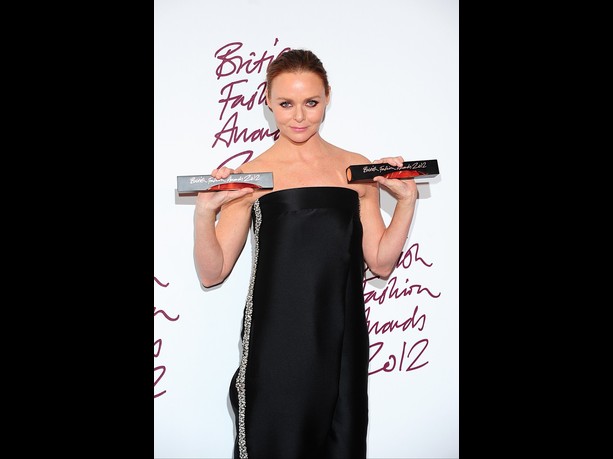 2 thoughts on “British Fashion Awards… the round up”